The Epping & District Branch was formed on Saturday December 7th 1929, when around one hundred ex-servicemen met at the Armoury in Hemnall Street (now the Sportscentre). The first Branch President was Colonel R.F. Wall, the Managing Director of Tate & Lyle, who lived at Ivylands, Epping.

In recent years the Branch has been very active. A plaque to commemorate the civilians killed in Epping during World War II was unveiled in November 2006, and in 2009 research by Branch member John Duffell led to the addition of 17 names from the First World War and 4 from the Second to Epping’s war memorial. At the same time the name of Marine Georgie Sparks was added. He had been killed in Afghanistan the previous year. The memorial was rededicated during a special service in April 2009.

On Saturday 9th October 2010 a service was held to commemorate the 70th anniversary of the bombing of Spriggs Oak, which was being used as a home for expectant mothers in 1940 . A memorial to the crew of the submarine HMS Sickle was unveiled in 2014. 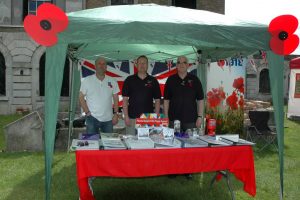 Today the Legion continues its work in Epping, with the annual Poppy Appeal and the Remembrance parade and service. The parade, led by the Epping Forest Pipe Band is probably now the biggest event held in the town, involving many different local organisations. Much emphasis is put on youth, with the Army Cadets, the Air Training Corps, Scouts, Guides, Brownies, Beavers and all the town’s schools playing an active part in the parade. In the last fifteen years the number of wreaths laid at the war memorial has increased from twenty to just under fifty. The Legion has also undertaken much research on the servicemen from Epping who gave their lives in wartime, and this is now preserved for generations to come.

If you would like any further information on the Royal British Legion in Epping, please email Branch Secretary John Duffell at johnduffell@live.co.uk 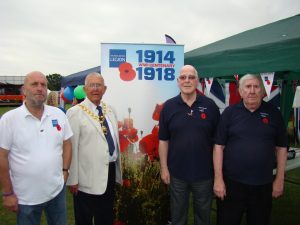